St. Francis was born in the town of Assisi, Italy around the year 1182.
Baptized "John" Bernadone, he acquired the nickname "Francis" at an early age, likely because of his father Pietro's business dealings in France.  Pietro Bernardone was a successful cloth merchant and a member of the rising business class of medieval Italy.  He provided his family with a quite comfortable lifestyle.  He also had dreams of Francis continuing the family business and rising to prominence in the town.  As such, he was only too happy to outfit Francis with the equipment needed to serve in the army and go off to war.
1 / 16
Francis' military experience was short-lived, as he was soon captured, spending almost a year as a prisoner of war.  He returned to Assisi a weak man, but also a changed one.  His forced solitude led him to ask questions about his future, questions he continued to ponder as he recuperated at home.

One day, in 1205, he stopped to reflect and pray in the crumbling chapel of St. Damian, down the hill from Assisi.  There, in a mystical experience, he heard Christ speaking to him from the cross: "Francis, repair my church, which as you see is falling into ruins."  Francis took this charge literally and began to rebuild the very structure in which he had prayed.

Some time after his mystical vision in the little chapel of San Damiano, Francis was walking the hillsides on the outskirts of Assisi, when he came upon a leper in his path.  Usually horrified by the look and stench of the lepers, Francis this time resisted his temptation to flee.  Instead, he approached the leper and embraced him.  Francis saw in the leper a person who looked on the outside the way Francis had been viewing himself within; he embraced the leper as Christ had embraced him from the crucufix.

Such antics earned his father's disapproval, turned anger when Francis sold his father's cloth to raise funds for the needed repairs on the chapel.  Dragged before the bishop, Francis declared that God alone was his father and entrusted himself to the bishop and the Church.
The strange behavior of this favored son of Assisi brought more than a few laughs and much ridicule.  But it also attracted others from the town and the surrounding area who appreciated what this gallant young man was trying to accomplish.  They joined him in repairing churches, ministering to the lepers, begging alms, and preaching the Gospel. 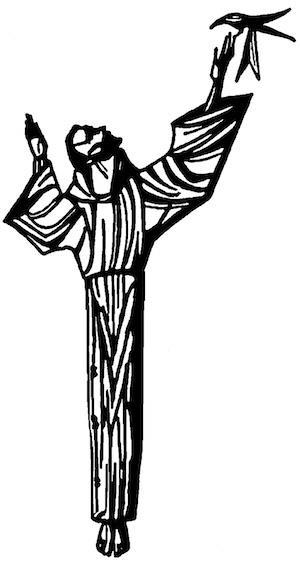 As the group grew in numbers, Francis was wise enough to know that many such groups had fallen away from the Church and become heretical in their teachings.  And so, in 1209, he and his followers set out for Rome, to seek the approval of the Pope for the simple way of life they proposed to live.  The Pope had misgivings, but tradition says a dream helped Pope Innocent III to realize that this way of life was a literal following of the Gospel, and that Francis would be a "support" for the whole Church.
Thus the way of life Francis proposed received verbal approval from the Pope in the year 1209.  In the immediate years that followed, there was phenomenal growth, with literally thousands of men and women joining this movement while Francis was still alive.
Francis and his brothers would go out in small groups to preach penance, to wish those they met "Peace and all good," and to proclaim the Good News of Jesus Christ.  After a period of time, they would return to a designated spot to pray, to share their experiences, and to renew themselves in their way of life.  A missionary effort was an early thrust, and Francis himself was able to preach before a Sultan of the East.  This period also brought the first martyrs to the Order, as St. Berard and his companions died in Morocco, an inspiration that led Anthony of Padua to the Friars.
St. Clare, a rich young woman from Assisi, also sought to live this way of life, and was welcomed by Francis.  Clare and her sisters were given the restored Chapel of St. Damian as a place to pursue their contemplative life.  This became the Second Order of St. Francis, also known as the Poor Clares.

Finally, accepting that many women and men had responsibilities to families but would like to live aspects of the Franciscan life, Francis wrote another Rule of life for what is known as the Third Order or the Secular Franciscan Order.
Many aspects of Francis' life are well known.  Francis wanted all to experience God's love in sending His Son into the world, and so he created what is said to be the first Christmas crib, at the town of Greccio in 1223, allowing that community to better picture the miracle of Bethlehem.  In 1224, while praying on Mount La Verna, Francis received the marks of our Lord's Passion in his hands, feet, and side, a miracle known as the Stigmata.  And capturing his love for all of creation, in 1225 Francis completed the "Canticle of the Creatures," wherein he recognized God's goodness in "Brother Sun" and "Sister Moon" and all of creation.
Francis' earthly life came to an end on the evening of October 3, 1226.  After much suffering, he asked to be laid on the bare earth outside the Chapel of Our Lady of the Angels below the hill of Assisi.  There he would commend his soul to his Heavenly Father.
St. Francis was declared a saint only two years later, in 1228, and in that same year work was begun on his permanent burial place in Assisi.  In 1230, St. Francis' mortal remains were moved to the church that the world knows today as the Basilica of St. Francis.  It remains one of the most popular destinations of pilgrimage in the world.